For a long time, thinking about Porridge would let most people imagine breakfast at a retirement home. Suddenly, Porridge somehow became fashionable. I have to admit that I have resisted for a long time. For one thing, we had already clarified, I am not a lover of an early meal. Further sweets in the early morning I find even more difficult. At some point, I did give it a try and have to admit, I was thrilled. This Pumpkin Buckwheat Porridge is my fall version of this trendy breakfast.

The most fascinating thing about for me about porridge is the fact that it keeps me incredibly long full. Since I promised you a few pumpkin recipes, today I share a gluten-free recipe for Pumpkin Buckwheat Porridge with spices, maple syrup, cocoa nips and walnuts with you.

The pumpkin buckwheat porridge is quickly prepared and if you have leftovers, it also tastes great cold. Definitely another good use for pumpkin, one of the wonderful seasonal vegetable varieties of the. Of course the porridge is gluten-free like all my recipes. If you have no problems with gluten, also not bad, it is simply a delicious breakfast.

In addition to the buckwheat groats, the porridge also contains oat flakes. Oat is, by the way, naturally gluten-free or has nearly no gluten. Since oats are often ground in the same mill as other grains with gluten, you may have to be careful. Meanwhile, there are many brands that make sure their oat is ground separately in a gluten-free environment.

Of course you do not necessarily need buckwheat. You can also do the porridge classically and just add pumpkin. Simply exchange the amount of buckwheat with more oat flakes. For the more hearty breakfast with pumpkin, I recommend you try my pumpkin potato fritters. Those in morning with a poached egg is another perfect breakfast with pumpkin just the savory version.

What do you need for making vegan Pumpkin Buckwheat Porridge? 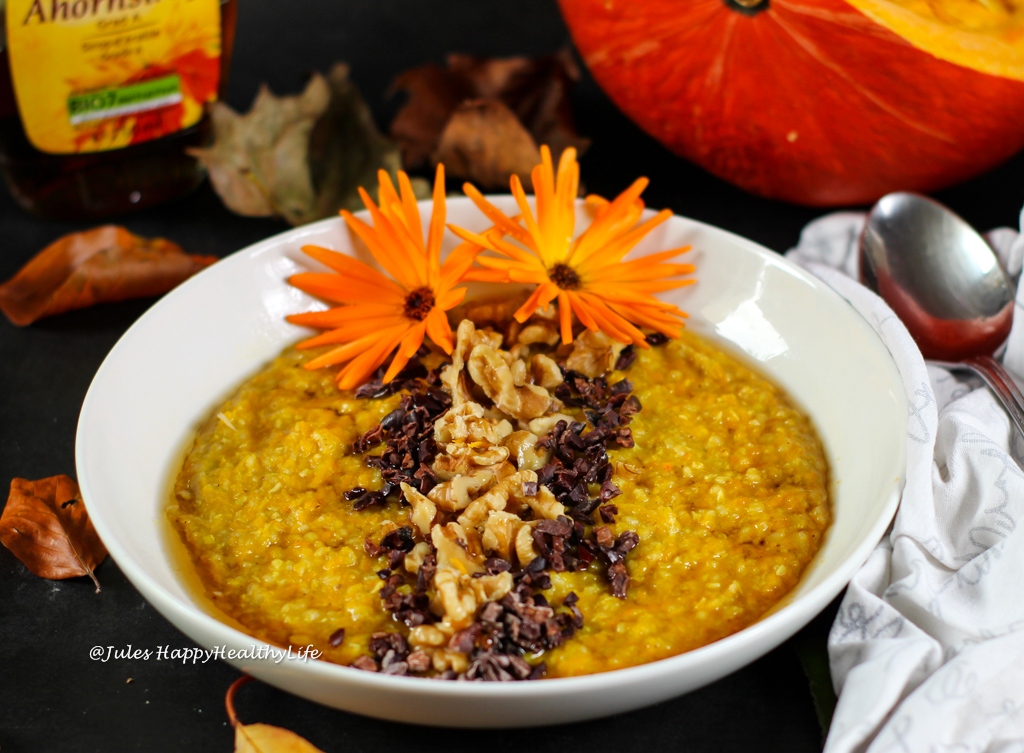 CEVICHE OF GILTHEAD AND PHYSALIS

Welcome! My name is Jules or actually Juliane. With my love for amazing food, fantastic drinks and everything about „Cuisine & Food" I started this blog. Here I share all my favourite recipes, my favorite restaurants or specialty stores as well as posts about health and happiness. Stay tuned, hopefully come back and sign up for my social media channels. #juleshappyhealthylife